There are stories everywhere and some of them are written in gum. 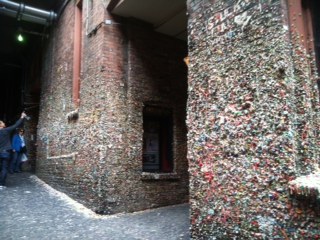 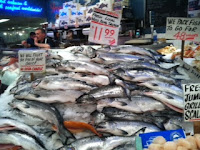 I took a recent trip to Seattle, Washington with my teenage daughter to see my brother and sister-in-law and we visited the legendary Pike Place Market with the piles of fresh salmon on ice, fruits and veggies, crafts people, and bakeries. 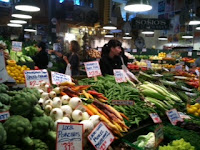 Wandering among the vendors, we spotted the bay below and the Seattle Aquarium a couple of blocks away. There was not a clear path from the market to the aquarium and we soon found ourselves winding down stairways and alleys. 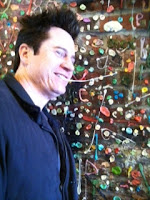 That's where we saw the sign for the GUM WALL. I didn't remember seeing that one in the travel brochure. The name describes it all, it is a wall (actually about four walls) completely covered in gum. It's the sort of place that makes you instantly want to do something ridiculous.


After a few silly poses, we started asking questions. How does something like this get started? Was there a sudden plot to decorate the wall in gum or did little blobs of Juicy Fruit just accumulate over time? 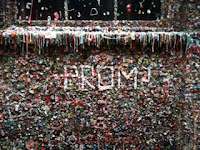 As we walked a little farther we saw notes written in gum. There was an invitation to the prom and a proposal of marriage. Instantly stories started developing in my writer's brain. Who created the prom invitation? What was the response?

Did the same couple return years later with one proposing marriage or was it a different duo? 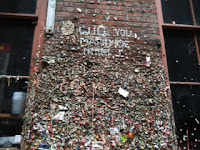 I imagined a Sandra Bullock romantic comedy where her high school sweetheart asks her to the prom in gum. They have a fight and go their separate ways, her to become an undercover FBI agent in a beauty pageant, and him to live his life as a fishmonger so he can stay near the Gum Wall and think about his lost love. Years later when her fiance, a Wall Street tycoon, wants to propose, he makes the mistake of writing his message in gum, making Sandra recall her tender romance with the fishmonger who is selling his fresh salmon right next door at Pike Place Market. 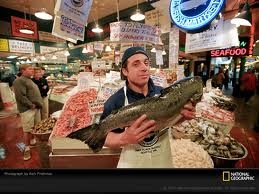 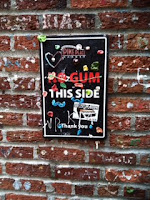 Sandra finds the fishmonger and they marry, of course, and the other guy just tries to ruin everyone's fun by putting up this pointless sign.

Hmm. I wonder if other writers plot like this while on vacation.