LOVE IN THE DMZ 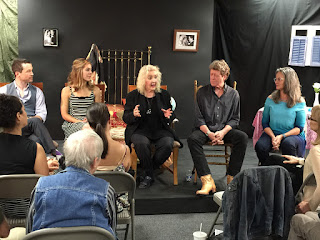 Friday, August 7, 2015,  I had the wonderful opportunity to see the southwest premier of Love in the DMZ: A Play in Letters by Julia Cameron at the new performance space at the Sol Acting Academy here in Albuquerque, NM.  It was a powerful and riveting story told in a series of poignant and poetic letters, a correspondence between an officer in Viet Nam and his young wife.

Cameron has masterfully created a story that is both heartbreaking and hopeful.

One of the highlights of the evening was meeting Julia Cameron who has had such a tremendous influence on my own writing. I studied her book, The Artist's Way, long before I published my first novel and it was a tremendous inspiration for both improving my craft and developing the perseverance required to be successful in the arts.

After the play there was a "talk back" with Julia pictured in the center above. Also participating in the talk back were the actors from left to right, Josh Heard and Catharine Pilafas, both extraordinarily talented. Seated to the right of Julia was the director, Daniel Region, and Producer, Vivian Nesbitt, herself an award winning actor, writer, and owner of Sol Acting Academy.

The play is based on a book of the same title. Love in the DMZ is one of three novellas contained within the book. I just had to read the other two after last night's performance and was amazed to discover the title on sale on Kindle for 99 cents! Check it out on Amazon!

Performances run through August 23, 2015. Read more about the play, see the trailer, and Check Out Showtimes Here!
Posted by Carolee Dean at 4:28 PM No comments:

I just returned from an amazing three days in Annapolis, Maryland. What an intriguing place. Staying at the Historic Maryland Inn was like stepping back into history. Eleven members of the Continental Congress lodged at that same hotel. 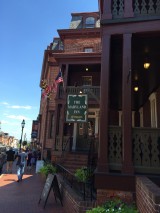 I was there as part of a Destiny Initiative Team working on forming a vision for the International Dyslexia Association. We met in some of the very rooms where our founding fathers debated politics hundreds of years ago.

I've served as president of the Southwest Branch since January, and it's been quite an experience. It was great meeting with other like minded people who want to make a difference in the lives of children and adults who struggle to read. Find out more.

I arrived a day early and was excited to fit in a little sight seeing. I walked for miles and miles in the pouring rain and saw everything from an exhibit on runaway slaves in an old house/museum store on Main Street to an elaborate display of battleship replicas at the Naval Academy.

I'm already thinking about my next trip!

Posted by Carolee Dean at 9:49 AM No comments: