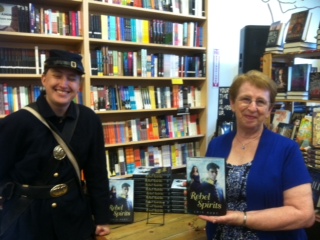 Author Lois Ruby celebrated the release of her latest ghost story, REBEL SPIRITS, on July 3 at Alamosa Books. If you live in or near Albuquerque and you have not visited Alamosa, get yourself on over there. It is the only independent bookstore in town focusing primarily on children's literature. Alamosa is located at 8810 Holly Ave. Suite D (Next to Bahama Bucks). If they don't have the book  you want, they will order it and teacher's get a 20% discount!!

July 3 was the 150th anniversary of the Battle of Gettysburg. Lois even brought a woman civil war re-enactor. Over 500 women and girls served in the Civil War disguised as young men. There was a great slide show and treats - including hard tack that Lois made herself, but we were all warned not to try it without soaking it first - or else we might break a tooth. Good luck on your new book, Lois!!
Posted by Carolee Dean at 10:50 AM