I THINK MY RUNNING APP IS SPYING ON ME


Yesterday I posted about last week's run in the foothills as part of my TeamQuest half marathon training. I shared that I had been talking about core workouts with my friend Brenda. When I got  home I received a message from Map My Run telling me that I had completed 12 miles for the week... and the app gave me suggestions for core workouts as well as tips for running up hill. I admittedly didn't do very well on that one. Did it know that I slowed down uphill? I wondered if the app had overheard my conversation.

I decided to test my theory. Today while I was out walking the Academy with my friends Eve and Lynne, I casually mentioned that I would really love to have a recipe for a salted caramel after workout recovery drink. About ten minutes after we finished our walk, I received an email notice from Map My Run that I had completed 13 miles for the week. Yay me! Included was a link for 16 Dietician Approved Pre and Post Workout Snacks. I'm not kidding. Here is the link: Dietician Approved Snacks. There is a picture of a green smoothie at the top of the post. NOT salted caramel, but still, it's weird.

Is Map My Run listening to my workout conversations?

If so, they obviously don't approve of my idea for a salted caramel smoothie. 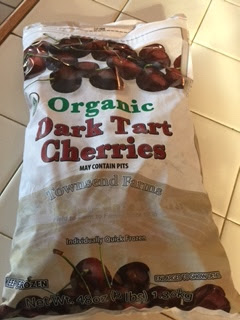 I've gone back through my previous posts and come up with a recipe I created for a Chocolate Covered Cherry Smoothie. It's actually pretty healthy. You can find it over at Tips for Life and Love, a Simon and Schuster site.

On a separate note, yesterday at the Southwest Branch of the International Dyslexia Association, we held our annual conference with over 330 people in attendance. 35 of those were students! It was an amazing event with great national presenters like Dr. Elaine Cheesman, Dr. Margie Gillis, and William Van Cleave. I'll write more about this soon.

In the meantime, next week I'm going to "casually" mention that I'd love to have a pair of psychedelic running pants.

Posted by Carolee Dean at 3:09 PM No comments:

Valentine's Day Run in the Foothills Last Sunday, Valentine's Day, as part of my TeamQuest training, I started off the week by running 3.2 miles in the foothills. It wasn't until we were already on the trail that I thought to ask my friend, Brenda, if she ever saw rattlesnakes out there. "Oh yes!" she informed me. "And coyotes and mountain lions." Fortunately, she brought her Rottweiler along.

Mostly I walked up hill and ran down hill but that bit of news gave me incentive to increase my speed.

About an hour after we returned, the Map My Run app sent me  6 Tips to Master Hill Running. They also sent me a 5 Minute Core Routine, which is very interesting since while we were on the run I told Brenda that my doctor had told me to be sure and work my core.

Hmm. This app may be watching me a little too closely. And listening too. Next time I use the app, I'm going to say something like, "I wish I had a recipe for a salted caramel recovery drink." If one pops up on my phone, I'll know they are listening.
Posted by Carolee Dean at 6:00 AM No comments:

Yes, I May Be Crazy - I'm Training for a Half Marathon 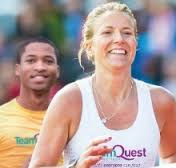 Superbowl Sunday, February 7, 2016, I began training for the Suja Rock 'n' Roll half marathon which will be held in San Diego on June 5. Since I'm not a runner, and not really much of an athlete at all for that matter, this should be very interesting. It's all part of my new (as of January 2015) post as President of the Southwest Branch of the International Dyslexia Association. IDA is spearheading a nationwide fundraising campaign called TeamQuest and I'm in charge of recruiting runners for New Mexico. Go me!

Full disclosure - the picture to the left is NOT me.

It seemed only fitting that I should be the first volunteer for the race, despite the fact that when I registered for the event, I was fifteen pounds overweight with chronic hip pain. I've lost five pounds and the hip pain is on the way out. So far so good.

Before heading out to eat junk food and watch the big game last Sunday (Yay Broncos!), I walked/ ran a total of 5 miles (full disclosure - I really only ran about half a mile). Part of that was a trek around the Albuquerque Academy (3.4 miles or roughly a 5K).  The Academy has some beautiful views of the Sandia Mountains. 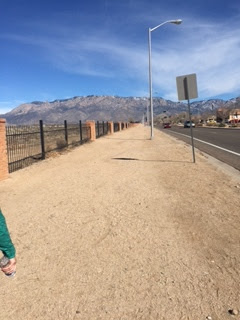 According to Map My Run  - my new favorite app, last week I walked/ran a total of 12 miles. And it only took me 3 hours and 10 minutes - spread across four separate days. If I could convince the marathon folks to let me take my time, I could totally do this. Maybe a week is asking too much though. I did find out that they have a shuttle bus that picks up the stragglers and takes them to the finish line. San Diego traffic can only be diverted for so long.

So if anybody out there wants to run a marathon or half marathon in San Diego to support the International Dyslexia Association - check out our TeamQuest post at http://southwestida.org. You don't have to live in Albuquerque. Training is going on all over the U.S.

If you're not a runner but you would still like to contribute to a good cause, check out my fundraising page at CAROLEE'S FUNDRAISING PAGE.

Maybe I'll see you in San Diego!
Posted by Carolee Dean at 12:27 PM No comments: