Deception Pass, The Eclipse, and Winnie-the-Pooh 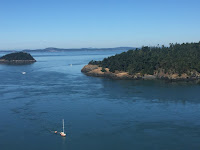 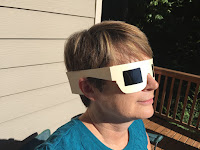 Last week was quite an adventure. My husband and I flew to Seattle and then took the train to Bellingham, Washington where we spent a few days with my brother and sister-in-law and got to watch the eclipse. We squeezed in a drive to Vancouver, Canada and a ferry boat ride to the San Juan Islands where we visited  Friday Harbor and Deception Pass. Now wouldn't those make good book titles?

My creative wheels are turning. 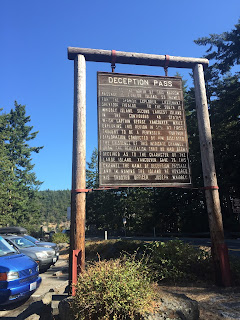 On Wednesday my husband flew home and I took the train to Portland where I was graciously welcomed by members of the Oregon Branch of the International Dyslexia Association. On Thursday I gave a workshop on Adventures in Verse: Using Poetry to Support Reading, Writing and Speech. Afterward my good friend, Paula Moraine, and I held teacher workshops for the Oregon Branch including a three-hour workshop on The Secret Language of Stories. I will be holding several SLOS Workshops this fall in Colorado, New Jersey, Georgia and Los Angeles at various conferences across the country. There is a tab on this blog where you may learn all about SLOS and find several stories that I have already analyzed using this method that I created to teach writing and story analysis to students of all ages.

On today's post I'm including an analysis of Finding Winnie, the story Paula and I shared at the Oregon workshop for those who so graciously attended and for anyone else who might be interested. Paula has added a wonderful executive function perspective to my material and has written two books on the subject.

Finding Winnie: The True Story of the World’s Most Famous Bear by Lindsay Mattock. Winner of the Caldecott Medal.

SUMMARY: In 1914, Harry Colebourn, on his way to war, rescued a baby bear and took her with him across the ocean. He named her Winnie and left her at the London Zoo where a small boy named Christopher Robin befriended her. This true story of the bear that inspired Winnie-the-Pooh is told from the perspective of Harry’s great granddaughter, Lindsay Mattock.

ORDINARY WORLD: Harry Colebourn lives in Winnipeg and works as a veterinarian.
CALL AND RESPONSE: World War I breaks out and Harry gets on a train with the other troops headed to Valcartier, Canada.
MENTORS, GUIDES, & GIFTS: He gets off of the train to take a little walk around the station and pays a trapper twenty dollars for a bear. He names the bear Winnipeg to remind his regiment of home as they gather in Valcartier and prepare to go across the sea.
CROSSING: Harry takes Winnie with him in a giant ship across the Atlantic Ocean.
NEW WORLD: The regiment trains on the Salisbury Plain and Winnie becomes the Mascot of the Second Canadian Infantry Brigade.
PROBLEM, PRIZE, PLAN: The order comes that it is time to fight. Harry doesn’t want Winnie to get hurt so he plans to take her some place safe.
MIDPOINT ATTEMPT: Harry takes Winnie to the London Zoo.
DOWNTIME RESPONSE: Harry and Winnie say goodbye. He tells her, “I’ll always love you. You’ll always be my bear.”
CHASE & ESCAPE: Harry goes off to take care of the horses at the front in France.
DEATH & TRANSFORMATION: It seems that Winnie’s story is over, but then a boy named Christopher Robin comes to the zoo and a new story begins.
CLIMAX/ THE FINAL TEST: Christopher Robin plays in the bear enclosure with Winnie. He loves the bear so much that he names his stuffed bear Winnie-the-Pooh. Playing with Winnie inspires him to take his stuffed bear on adventures in the woods.
FINAL REWARD: Christopher Robin’s father, A.A. Milne, writes many famous books about his son and his bear and that’s how Harry’s Winnie becomes the famous Winnie-the-Pooh. Harry returns to visit Winnie and is happy to discover that she has found people who love her. A statue of Winnie and Harry is unveiled in Winnipeg in 1992.

Please send feedback if you are using SLOS with students. I always love hearing  your stories.