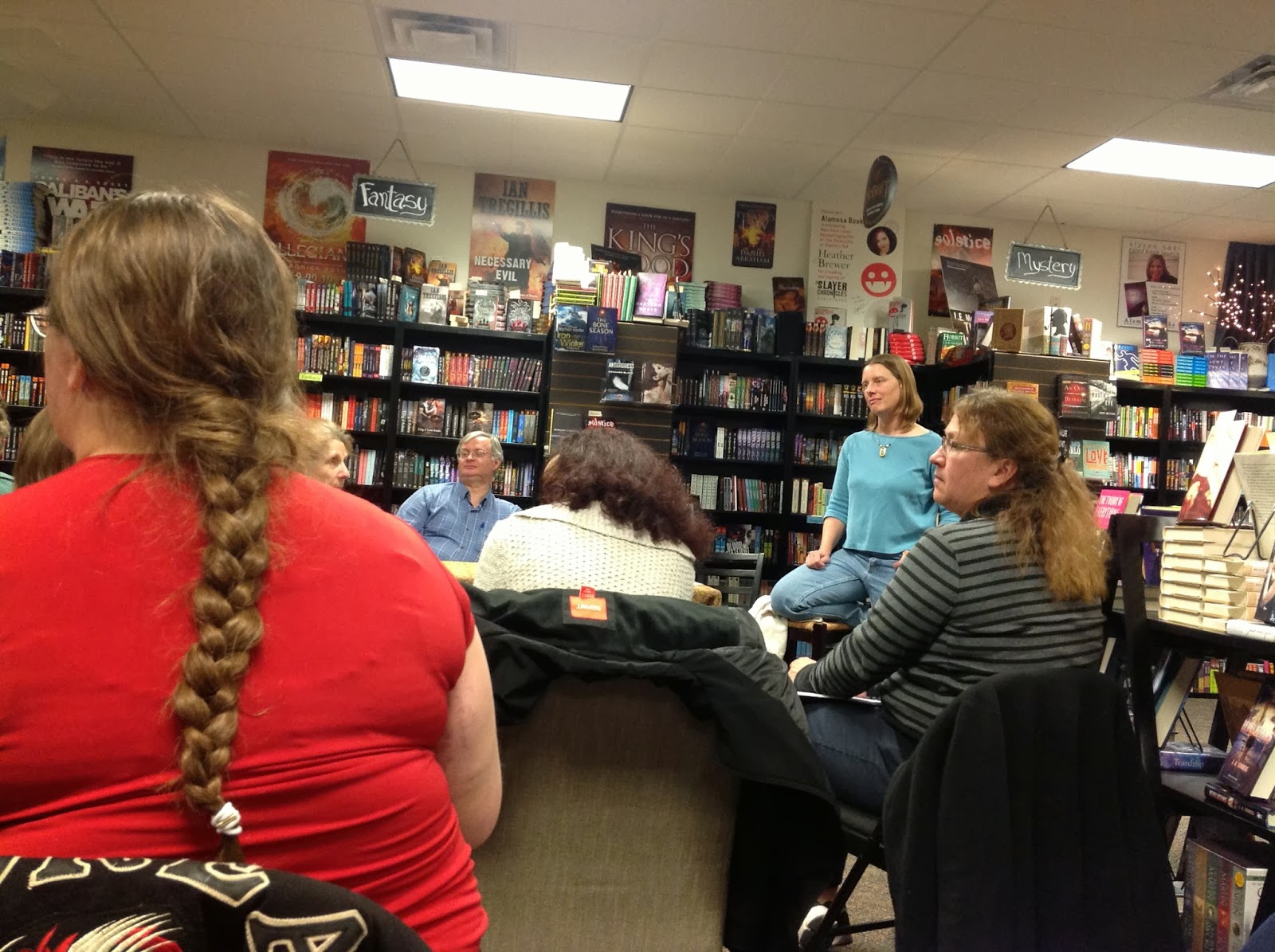 On Tuesday, January 14, 2014, author Chris Eboch led a discussion on voice during our monthly SCBWI meeting at the Alamosa Reading Room (the latest addition to Alamosa Books).

She discussed the difference between character voice and author voice, pointing out that the author's voice is that unique style observed across a variety of different characters.

Editor's often say they are looking for authors with a strong voice, but what do they mean?
Chris said the secret is to create a voice that is distinct, consistent, and clear.

When people read examples of writing that shows a strong voice, the excerpts are often poetic and beautifully written, but it's important to note that not all strong voices are poetic. Chris prefers a style where she gets lost in the story even if the voice is harrowing or crude rather than literary and poetic.

After asking each audience member to write a list of some of their favorite books, she said to look for similarities between books.(i.e.stories with sense of humor, a lot of action, sweet picture books, or angsty young adult romances.) She suggested writers look at their own writing for styles they revisit and trends they lean toward.

She concluded by asking - Are you writing what you love? If so, that's a good sign.
That was the best advice of all!

Chris Eboch will be offering a workshop on voice. See the Details below.

THE IMPOSSIBLE KNIFE OF MEMORY by Laurie Halse Anderson 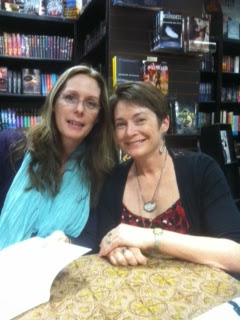 Laurie Halse Anderson was at Alamosa Books on 1/10/14 on tour with her latest novel, The Impossible Knife of Memory. Laurie is a warm and endearing person as well as a fabulous author. She is probably most well known for her groundbreaking young adult novel, Speak, but she has also written numerous contemporary and historical novels as well as picture books and the middle grade series, Vet Volunteers.

hard time learning to read and received assistance from a reading specialist in elementary school. Then she caught the reading fire and started reading everywhere. The library became her refuge.

I found this aspect of her story fascinating since I work with struggling readers and am always wondering how to inspire them to love reading.

Laurie said she has a dream of a literate America where every one reads for fun, surmising that if you still read for fun at eighteen then you will also read for information and learn to think for yourself. Unfortunately, every time we hand kids a book they can't connect with we kill that spirit.

Reading canonical literature, written by old, dead white dudes, made English her least favorite class in high school. She understood the value of the classics later in life, when she had the perspective to appreciate them, so she sees their worth, but she also believes we must provide teens with stories they relate to.

She suggested teachers read From Hinton to Hamlet: Building Bridges Between Young Adult Literature and the Classics by Sarah K. Herz. One recommendation she shared from that text is to use YA fiction to teach literary devices while tying the teen novel thematically to canonical literature.  Many teachers using Speak in the classroom tie it to The Scarlet Letter.

The Impossible Knife of  Memory, Laurie's latest work, is about a girl, Hayley Kincain, and her father who have spent the last five years on the road, trying to outrun their demons and their memories. They return to her father's hometown to try to have a normal life, but the only method her father can find to deal with his PTSD is through drugs and alcohol.

The story was inspired by the experiences of Laurie's family and her father's bouts with alcohol and PTSD. She shared that during World War II, he helped liberate the inmates of Dachau, one of the most notorious Nazi concentration camps. Her father was working on a college campus during the Vietnam Nam era and it caused his experiences at Dachau to come back to him with a vengeance. He fell apart and lost his job. They lost their home. She said her father now has dementia and sometimes can't remember her mother but he wakes up screaming, remembering Dachau.

The power of memory.
.
Laurie ended her talk by stating that one of her aims as an author is to produce literature that connects with the spirits of young people. Anyone who has read her work knows she had definitely accomplished that mission.

Thank you for another fabulous story!

Posted by Carolee Dean at 5:10 PM No comments: