The most important stories in the world are the stories about real people. I was reminded of this last month when my father-in-law died. The last four weeks have been a whirlwind of travel, memorial planning, and sharing stories.

Right after Charlie's death, I drove down to Texas to be with my mother-in-law. She had asked me to write his obituary and it was something I wanted to do in person rather than by phone. Charlie was a great man who had lived a long and very colorful life.

My niece arrived soon after I did and the three of us spent the next few days sharing stories, hunting through the attic for old photographs, and remembering the man Charlie had been before dementia set in and he had forgotten our names.

The obituary became a mini-biography. Here is the truly wonderful thing about obituaries, you write them, pay for them, and the newspaper/s prints them. It's a simple yet wonderful (though pricey) way to give a final tribute to someone. No approval process, no rejection letters, though I did get an interesting email from the Odessa American stating that a death certificate would have to be provided due to the submission of "suspicious" obituaries in the past.

I'll bet there's a story there!

As I was writing the obituary, I remembered how I'd always wanted to collect my father-in-law's stories. He was a master storyteller and much of what I learned about crafting tales, I learned from him. All of his stories were true... mostly.  He had a phrase I will never forget:

Any story worth telling is worth embellishing.

As he grew older, I tried to get him to repeat his stories so I could write them down. I suggested tape recording him. Facts get forgotten over the years and the power of a story is in the details. But he was too modest (or perhaps proud) to retell his tales for perpetuity, so the best I could do was to collect bits and pieces as I recalled them.

Charlie had been born in poverty during the depression, served in the Navy during World War II, returned to Texas and scraped together enough money to buy a jewelry/ watch repair shop, and then had lost everything when his jewelry store burned down. He had eventually gotten involved in the oil business and become quite successful, but his road to success was long and difficult.

He'd gotten his first job at the age of five, poking a mule all day long with a stick to prod it along as it circled a sugar cane mill in the making of syrup. At the end of the day, instead of paying Charlie cash, the owner gave Charlie's father a jar of syrup. The young boy reeled at the injustice. His father told him, "Son, I have to feed my family." Charlie didn't understand the full significance of that statement until many years later.

Every time I visited Charlie at the Alzheimer's facility where he spent his last couple of years, I was heartsick to know that it was too late to collect his stories.

Then, as I was writing the obituary, a wonderful thing happened. As people arrived to give condolences and bring flowers or food, they started telling stories.

I had my iPad ready, since that's where I was writing the obit, and I started taking notes. The vignettes were so plentiful I decided to write them down and create a collection for the family. As each new person came to visit, I told them what I was doing, and they added to the stories.

Most of the tales were hilarious. It was a wonderful way to remember the man Charlie had been, instead of the man he had become in his last few years.

I believe that even works of fiction should fundamentally start with a real person. Not necessarily a biography, but something capturing the essence of who people are - their hopes and aspirations and their struggles.

And here is the truly powerful thing about writing about real people... It doesn't matter if your audience is the world, your immediate family, or just yourself.

The obituary writing process reminded me that the most important stories in the world are the stories about real people. They are tales filled with heartache and laughter. Dreams and despair. They remind us of who we are and where we have been. They enlighten us about our history and illuminate our path. They help us understand where we have been, and if we listen very closely, they just might give us a light to see where we are going.
Posted by Carolee Dean at 1:16 PM 2 comments: 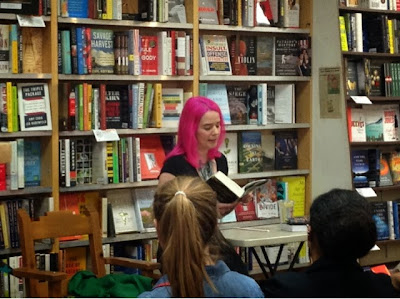 Tuesday, 4/8/14, was Launch Day for Dreams of Gods and Monsters and author Laini Taylor was right here in Albuquerque, NM at Bookworks. Albuquerque was the first stop on her book tour! DOGAM is the third book in her Daughter of Smoke and Bone Trilogy. Below are samples of fan art sent to Laini by readers from all over the world. 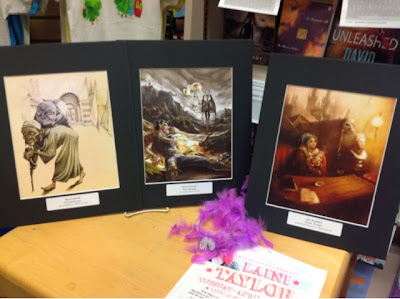 Laini gave the audience some great insights into her writing process. She said deadlines really help her. She always writes most of the book at the end.  While working on DOGAM she went to a hotel for 6 days and wrote 20,000 words. The hard part was that it took her six months to write the first 20,000 words.

She encouraged young writers not to get discouraged. Sometimes young writers assume they aren't any good because the process is so difficult. She said, the truth is that writing is just hard work and you have to learn to be tough.

Laini likes to give herself a word count for the day, usually around 1,000 words. If she makes it, she puts a sticker on her calendar. It may sound silly, but it works!

The book signing was a great event. There was cake and henna tattoos and Laini even brought along some colorful wigs. I'm the one in Blue:) 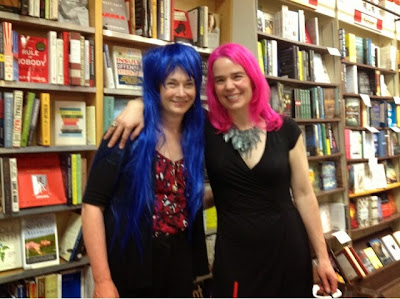 Posted by Carolee Dean at 7:40 PM No comments: