Cover Reveal for FORGET ME NOT

The Cover Reveal for Forget Me Not is being hosted by Kari Olson at a good addiction. Check out the contest at her site. You could win an ARC of Forget Me Not and a copy of Take Me There. The deadline is February 10, 2012.

As a speech-language pathologist in the public schools, I feel lucky that I get to spend nearly every day in high school.  People often ask me if my students inspire my work.  The answer is yes and no.  I never write about my students.  I will leave it up to them to write their own stories.  I will say that their struggles and experiences remind me of my own struggles and experiences.  Mostly I write about the things that perplexed or disturbed or haunted me when I was their age.  The things I never quite got over.

Forget Me Not was inspired by an incident that has haunted me for decades.  When I was in the seventh grade, one of my classmates hung himself. His best friend showed up at school the next day, weeping and telling the story of what had happened. My entire middle school was riveted by this experience and the school sent a busload of students to his funeral (something that would never happen in this day and age). I didn't go and I've always regretted it.

Forget Me Not is a paranormal verse novel that helped me work through my feelings about something that happened many years ago that left me with a question that has haunted me ever since. "What happens to the soul after suicide?"

I don't want to give any spoilers, but I will say that in spite of the theme, the book has a happy ending.
But not for everyone.
Posted by Carolee Dean at 3:41 PM 6 comments: 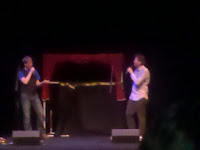