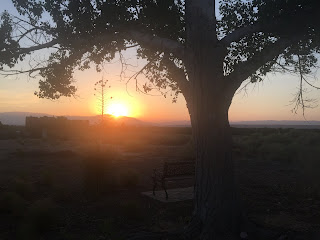 I recently attended an informal writing retreat in the middle of the desert at an abbey with a few of my long-time writing friends. The abbey rents out its facilities for retreats and the accommodations were sparse, but it was also far enough out of town that the mountains didn't block the sunrises or sunsets. It is this very desolation of the dessert that allows for such a beautiful, unobstructed sky. 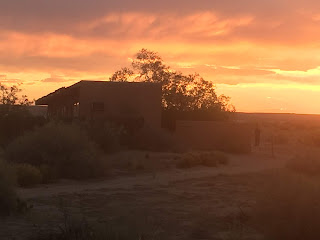 It got me thinking about stories and how it's fairly easy for me to create a spectacular beginning and/or a stunning ending. It is often my vision of an exciting scene at either the beginning or the ending of a story that inspires me to write the story in the first place. Then there is the despair that happens in the murky middle where I have to invent plot twists just to keep the story slogging along. It's not unlike the dry, hot middle of the day when nothing much seems to be happening and I can barely put one foot in front of the other just to make it to the shade. 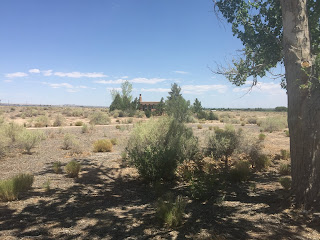 The beginning of a story starts out in the main characters (MC) Ordinary World. Then some inciting event and a Call to Adventure turn the MC's world upside down. This is followed by a reaction, typically a Refusal to embark on the Hero's Journey because the danger is just too great. A Mentor shows up to provide advice along with cool Gifts like ruby red slippers or an invisibility cloak. Then the MC Crosses over to the New World where we enter the middle of the story.

The story is still exciting at this point because the MC faces all manner of dangerous and often hilarious attempts to fit in. Soon there is a Problem to be solved or a Prize to be sought and a Plan must be made to achieve it. There is a Midpoint Attempt to solve the problem and/or gain the prize, followed by Downtime Response as the MC reacts to either the success or failure of the attempt.

This structure works quite well for a short story, a picture book, a play, or even a screenplay with a fairly linear plot, but what if you want to write a 300, 400 or 800 page novel? You're going to need more action in the middle.

Going back to the mid section of the story outlined above, there is a Plan, Attempt, Response sequence that may be repeated an infinite number of times. This is why the structure of an epic poem, a narrative picture book, and War and Peace all have a fundamentally similar foundation. The MC makes a Plan and then Attempts to carry it out and Responds emotionally to the success or failure which leads to the creation of a new Plan. Other elements may also be repeated such as Crossing over into additional New Worlds.

Karen S. Wiesner discusses a similar structure for the middle of a story in First Draft in 30 Days: A Novel Writer's System for Building a Complete and Cohesive Manuscript.

Christopher Vogler explains the Hero's Journey structure in his book, the Writer's Journey: Mythic Structure for Writers. I discuss how I use a combination of strategies for both writing my novels and teaching writing to children in The Secret Language of Stories.

As for the ending of the story, the Downtime Response is followed by Chase and Escape as the action twists in an unexpected direction. A Death and Transformation occurs either before or during the Climax and the story ends with a Final Reward where the MC gets what he or she deserves which is not always what was desired at the beginning of the story.

To learn more about this structure, check out the books by Christopher Vogler's, Karen Wiesner, and my page on the Secret Language of Stories. Also watch my Teacher Resource section for Teachers Pay Teachers activities using the Hero's Journey coming soon!
Posted by Carolee Dean at 8:01 AM No comments: