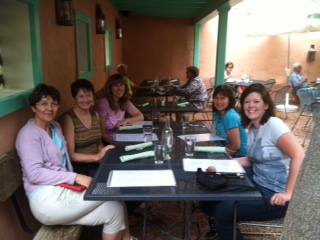 I have just returned from the First Annual Gathering Authors Retreat in Taos, New Mexico and am already looking forward to next year's event. The Gathering is a LOOSELY organized group of traditionally published New Mexico children's authors who meet to offer each other encouragement, support, and industry tips. In the photo above we are about to enjoy lunch at Lambert's. If you aren't used to New Mexico chile, beware. Left side - front to back (Kersten Hamilton, Me-Carolee Dean, Kimberley Griffiths Little). Right side - back to front (Lauren Bjorkman and Sheralyn Pratt - joining us from Utah). Not pictured (Sheralyn's border collie - SeBi). 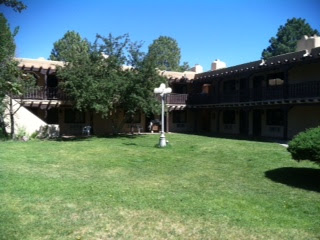 Our retreat, also LOOSELY organized, was held at the Sagebrush Inn. The only cost was travel and hotel expenses. We made a list of topics we wanted to cover and that was the extent of our planning. Topics included - The Changing Face-Book of Social Media, Wacky Marketing Ideas, Effective Marketing Plans, Publishing Woes/Joys, and How to Hit the NY Times Best Seller List). 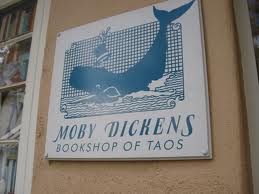 Some of the most memorable events of the retreat included our totally unplanned excursions. A discussion about dystopian literature and end-of-the-world scenarios (including the Maya apocalypse I recently finished writing) led us to create the Twitter hashtag #createyourownapocalypse and coerce the owners of Moby Dickens to let us film a spontaneous YouTube video in their bookstore. (The video will be posted as soon as Sheralyn figures out her new computer program.) 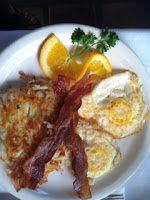 I ran into a librarian friend of mine who was attending an Art Institute at the Sagebrush. She described the Inn as "shabby-chic," which also describes most of Taos. The cost of lodging also covered a free, cook-to-order breakfast. Several of us pitched story ideas during these breakfast meetings which led to the death of at least one debutante by Main Character Assassination. Better to get rid of them BEFORE you write an entire story about them. 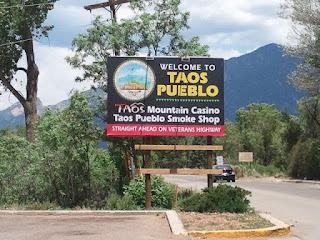 In addition to having stimulating conversations, we found time to take a guided tour of the Taos Pueblo and shop on the Plaza where we toured an art gallery, listened to street musicians, and checked out Day of the Dead figurines. We've already had several out-of-state authors who say they are planning to join us next year. We are planning a night of music on the Plaza and we might even see some tribal dancing. If you are a traditionally published author/illustrator, contact me at caroleedean@yahoo.com  for additional details.