Aux Dog Theater and THE HAUNTING OF HILL HOUSE 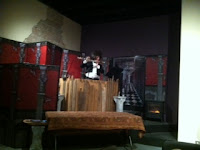 Friday, October 5th, my husband and I met friends at the Aux Dog Theater. It's a small theater on Monte Vista just off of Central down by UNM. I'd never been to the Aux Dog before and was delighted to find a cozy lobby with live music both before the production and during intermission performed on bass flute by a man in a tuxedo and wig. 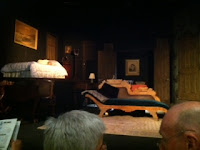 A friend of ours was in the play, The Haunting of Hill House. It was based on the novel of the same name by Shirley Jackson. She is probably best known for her short story, "The Lottery" first published in 1948 in The New Yorker magazine, which was subsequently inundated with mail in response to the story. I still remember reading "The Lottery" in my high school English class.

The actors did a wonderful job. My favorite character was the snarky housekeeper, Mrs. Dudley, who kept reminding everyone that she would be leaving "before dark" and that if they screamed, the house was so remote that no one would hear them.

"The Haunting of Hill House" is going on now through October 28. Get details at the theater's website.
Posted by Carolee Dean at 7:00 AM