Author Robison Wells was at Alamosa Books last week. I don't usually attend author signings on Tuesdays because it's my late day (after working at my regular high school I drive across town to see kids at a Charter School). But it was right before our monthly SCBWI meeting so I decided to skip dinner and go to the bookstore. 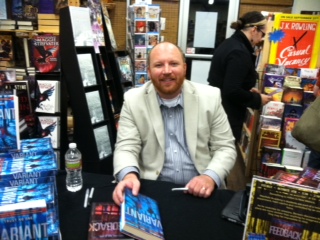 Not only did Robison Wells have a fascinating story to tell, I also discovered that he has the same agent that I do - the amazing Sara Crowe. She has a blog featuring posts from her authors. Check it out at the Crowe's Nest.

Robison said he didn't plan on being a writer. His older brother is a writer (Dan Wells is also represented by Sara Crowe). Robison told him he had a great idea for a story and that Dan should write it. Dan told him to write it himself. He also told Robison a piece of advice that has stuck with his younger brother for years. "The difference between writers and everyone else is that writers actually write." I have found this to be very true. A lot of people want the experience of "being" a writer but very few are willing to put forth the effort.

Fortunately for all of us, Robison was willing to make the effort or else the world wouldn't have Variant and the sequel, Feedback. Variant is the story of a young man, Benson Fisher, who receives a scholarship to Maxfield Academy, only to discover, soon after his arrival, that he has become a prisoner of the school.

The most interesting part of Robison's talk was his discussion of what happened between writing the two books. He began to suffer severe anxiety attacks and became unable to leave his house. His work suffered and his family became very worried. I'm not going to go into details here because it is Robison's story to tell and he has been brave enough to share his experiences on his blog.

One of the reason's I connected so strongly with his story is because I suffered almost daily panic attacks from the ages of 13-22. I never knew why they started or why they stopped, though I have some theories, and I never told anyone about them until many years later. I'm always impressed by people who are not only brave enough to seek help but who are also willing to share their experiences with others who might benefit from their perspective.

Interestingly, Ethan Roskos, another Crowe's Nester and author of Dr. Bird's Advice for Sad Poets, wrote a post this past Thursday for the Crowe's Nest about his experiences with depression and social anxiety disorder. The article was written in honor of Mental Illness Awareness Week (Oct 7-13 2012).

He discussed how helpful stories can be in helping people know they are not alone. Here is my favorite quote from his article.

I feel very honored to be a fellow Nester with such brave men!
Posted by Carolee Dean at 4:00 AM