Autumn in the Land of Enchantment: The International Balloon Fiesta 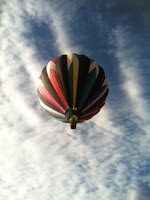 It's International Balloon Fiesta time in Albuquerque. The sky explodes with color. Motorists stop at random places along the road to watch hot air balloons descend, chase crews can be seen racing all over town, the population expands by 90,000 tourists and over 500 hot air balloons, and a general aura of magic takes over the city.

Locals like me usually avoid Balloon Fiesta Park, the take-off field built especially for this once a year event, unless we have out of town visitors we want to impress. 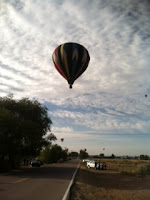 Everyone has to try it at least once. It's hard to describe the experience of watching hundreds of balloons inflating all around you as they slowly lift toward the sky. The traffic is a nightmare and you must get out there at 5:00 a.m. to find a decent parking place, but there's nothing like it.

There's plenty of action going on around town too, though. Locals and tourists alike gather at viewing hot spots. Depending on the direction of the wind, you might wake up to find balloons flying right over your house, and if they get low enough, you can hear the swoosh of the butane coming up from the basket as it inflates the balloon. 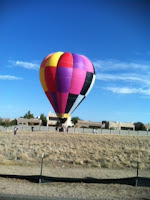 You never know where a balloon might land. This one came down in a vacant lot in the Trader Joe's near our house and further down the street another one landed at the middle School. A few years ago a balloon landed on the field right in the middle of my daughter's marching band practice. Sometimes they end up in parking lots, or even in the middle of the river, which is less hazardous than it sounds thanks to the drought. The photo below shows balloons landing on the Sandia Indian Reservation just north of town, and just a little further beyond that, the parking lot of the Sandia Casino is filled with people watching the event from the comfort of RVs, pickup trucks, and car hoods. 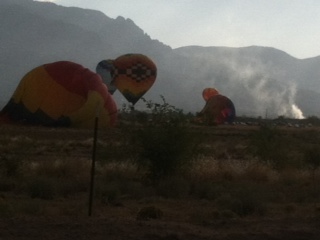 Balloons are finicky. They require certain weather conditions to be able to take off. Yesterday thousands of tourists left the field in disappointment because the wind prevented the balloons from going up at all. It wasn't a total disappointment. There is a fair-like atmosphere at Balloon Fiesta Park and the chance that the event you came thousands of miles to view may not happen at all, actually adds to the excitement when all goes well. Cheers go up from the crowd as balloons take off and there is a camaraderie of those who are brave enough to face the traffic and the chilly autumn morning.

The balloons remind me that things like rivers and air currents and life's events all flow in uncertain and fascinating ways. They make us all stop, sometimes in the middle of traffic, to watch in wonder and discover how enchanting it can be to embrace the unpredictable.
Posted by Carolee Dean at 1:21 PM