BOOKS FOR KIDS WRITTEN BY PEOPLE WITH AUTISM 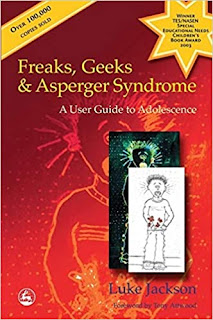 Freaks, Geeks, and Asperger Syndrome: A User Guide to Adolescence was written by Luke Jackson when he was 13 years old. He has Asperger Syndrome and also has a brother on the autism spectrum and another with AD/HD. His book provides tips on bullying, friendship, dating, and relationships. He also talks about how and when to talk to others about being on the autism spectrum. The insights this book provides are useful to parents and teachers as well as to people with AS. The book is 216 pages long and for ages 11-18. 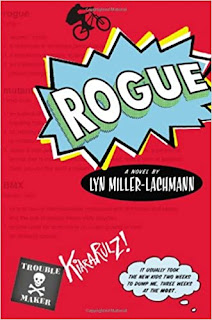 In Rogue by Lyn Miller-Lachmann. Kiara, an eighth-grade girl with Asperger’s is shunned at school and expelled after a violent outburst. She finds friendship with a neighbor boy until dark family secrets (his parents run a meth lab) threaten to destroy more than the budding kinship. Kiara finds inspiration with the X-Men character, Rogue (a mutant who unintentionally hurts anyone she touches until she learns to control her superpower). Kiara eventually discovers that she might just have special gifts of her own- The author, Lyn Miller-Lachmann, has Asperger’s Syndrome which lends authenticity and perspective to the story. Read my interview with Lyn HERE. 241 pages for grades 5-10. 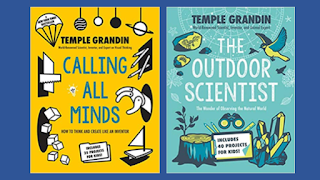 Out just this month (April 6) is a new book by Temple Grandin- The Outdoor Scientist: The Wonder of Observing the Natural World. This book is 208 pages long for grades 3-7 and contains 40 outdoor projects as well as information about Temple and other scientists who explore the natural world.

Calling All Minds: How to Think and Create Like an Inventor, also by Temple Grandin, looks at the science and methodology behind various inventions and shows kids how to think like an inventor. Temple talks about the inventions she created as a child. It is 240 pages long and is for kids in grades 3-7. Read more about Temple Grandin and her other books in last week's post.

See books for kids written about the life of Temple Grandin in my April 11 Blog Post. 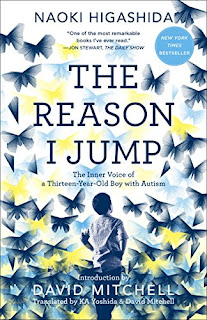 This last book is not specifically written for kids. It has received both criticism and accolades. I will share both sides of the conversation. The Reason I Jump: The Inner Voice of a Thirteen-Year-Old Boy With Autism was written by Naoki Higashida, a thirteen-year-old boy on the spectrum. He is described as being nonverbal, though to clarify, he is able to read out loud as is described by the translator, David Mitchell in the notes at the end of the book. It is unscripted conversations with which Naoki struggles. Even answering simple questions verbally is a challenge. He reportedly wrote his book (a Q&A interspersed with short, fictional stories) by pointing to letters on an alphabet grid that someone else transcribed into words and sentences. The book has received praise for providing unique insights into autism. It has also received criticism by those who question the validity of the methods used to elicit the answers to the Q&A saying it feels a bit too much like Facilitated Communication (FC) which has been debunked as pseudoscience. In FC an assistant guides and supports the hand of a non-verbal person as they point to letters. That was not the case with Naoki, but he did point to letters on a board in response to questions as opposed to typing them on a computer keyboard or communication device.

ASHA (American Speech-Language-Hearing Association) discourages the use FC and Spelling to Communicate. Read the ASHA  perspective to learn why. They do support independent typing as well as other forms of augmentative and alternative communication that are more independent in nature.

David Mitchell, the best-selling author of Cloud Atlas, translated Why I Jump into English with his wife, K.A. Yoshida. Mitchell appears in a video interview talking about his experience with the translation. He first became acquainted with Naoki's story when trying to better understand his own son with autism. He then set out to translate the book from Japanese into English so that he could share the story and its insights with his son's teachers. Watch his interview on YouTube and read his Q&A HERE.

At the end of the English translation of the book, Mitchell talks about conversations he has had with Naoki using his communication board. He also says that Naoki is a motivational speaker who reads aloud from a prepared script. He does not answer questions from the audience verbally, though. He types those responses. I looked on YouTube but could not find any examples of these motivational talks. If anyone is aware of any, I would like to know.

A 2020 documentary film of the same title inspired by the book features 5 other young people with autism. Watch the TRAILER to learn more.

Read this blog post by the National Council on Severe Autism which raises concerns about the movie.