October is Dyslexia Awareness Month and I'm raising awareness about children's authors with dyslexia. They are a tremendous inspiration to struggling young writers. My students love reading their stories and watching YouTube interviews with the authors talking about their learning challenges. This week I'm sharing two series by Henry Winkler co-written with Lin Oliver, Executive Director of the Society of Children's Book Writers and Illustrators. 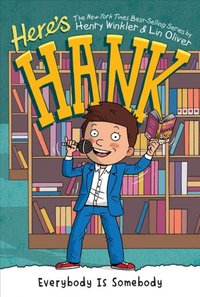 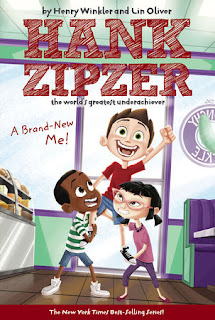 Hank Zipzer: The World's Greatest Underachiever, is a series of middle-grade novels based on Winkler's own experiences with dyslexia. Hank is smart, resourceful, funny, and creative, but he struggles with the many ways dyslexia can impact everyday life. The series is for grades 3-7, ages 8-12 with a reading Lexile of 610. The Here's Hank series is based on a younger version of the same boy in second grade and is written for ages 6-9 with a Lexile of 540-660.

In a 2019 NPR Article, Henry Winkler talked about his experiences with dyslexia. The comedian/actor didn't find out that he had dyslexia until he was 31. Like many adults, he discovered that he had a learning disability when he took his son to be tested.

Winkler spent most of his youth being treated like he was stupid or lazy and he felt like an underachiever. He was grounded through much of high school because of his poor school performance. When he discovered that he had a talent for acting, he had difficulty reading scripts impromptu. He used memorization, improvisation, and humor to make it as an actor on the hit TV show Happy Days. One of the hardest challenges for him was the emotional impact of having a learning difference and facing what he described as feelings of inadequacy and embarrassment. He says that he had "no sense of self."

Reading Rockets has a video interview with Henry Winkler and Lin Oliver on their website. They also have a video hosted by Henry Winkler called Reading and the Brain about the neuroscience of reading.

Although Winkler reported feeling stupid for most of his early life and adulthood, he was actually quite intelligent. He earned a Master of Fine Arts from Yale University.

His work reminds me of another author with dyslexia, DAV PILKEY, author of the Dog Man and Captain Underpants series. See my August POST about Dav and his books. Dav's stories are also filled with humor.

On a separate but related note, the International Dyslexia Association will be featuring a 24-hour virtual event on October 17, 2020, called Go Red (Reimagining Education for Dyslexia.) Go to their website for more information.