Thousands of people from many distant places gathered in Albuquerque this evening for the solar eclipse. My daughter came down from Colorado with her boyfriend, a high power telescope, and a solar filter. Thank God for science buffs. We gathered in our backyard with friends, family, and neighbors to view the moon coming between the earth and the sun. The process began around 6:30 p.m. and reached it's apex with the ring of fire appearing around 7:30. It was the first annular eclipse in 18 years.

Hardware stores sold out of welding glasses and hundreds waited in line at Balloon Fiesta Park for three hours or more where astronomers had set up telescopes for public viewing. A friend of ours also brought a stack of film negatives. Supposedly, if you stack four layers of film negatives together, you can look at the sun. I certainly hope that's true because we were all trying it out as we waited for a turn at the telescope.

We were very lucky to have this view from our backyard. Here are two photos through the telescope lens. 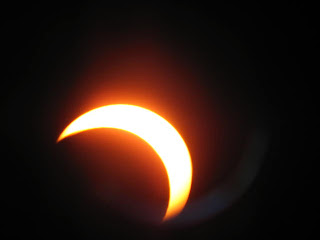 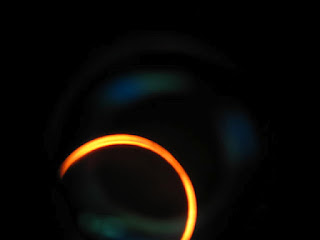 Besides the telescope, we made the traditional pin holes in paper. Not nearly as clear as the telescope, but surprisingly effective. What we didn't expect was to see images of the eclipse on the fence through the shadows of our tree leaves.

Next up is the Transverse of Venus on June 5!