Alyson Noel and FATED in Albuquerque 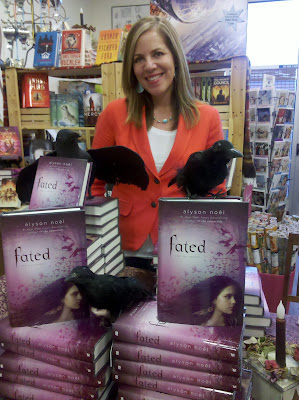 Alyson Noel kicked off her new Soul Seekers series in Albuquerque last Tuesday with FATED at Alamosa Books. FATED is the story of Daire Santos, a young girl who's mother sends her to Enchantment, New Mexico to live with a grandmother she has never met. Only Daire's grandmother knows what the girl's visions mean - that Daire is destined to travel between the worlds of the living and the dead as a soul seeker. Filled with romance, shamanism, and charm, this new series is sure to be a hit. 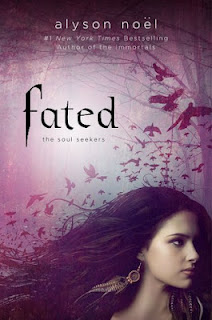 Alyson talked about her journey as a writer and said the beginning wasn't easy. FAKING NINETEEN was rejected by several publishers, including her own St. Martin's Press. At the time they didn't even publish YA. Then a new editor came on board who wanted to try books for teens. Her agent pitched the book again, and it sold. FAKING NINETEEN was the first teen title published by St. Martin's Press. Alyson said sales for her first seven books were unremarkable. Then EVERMORE hit the New York Times Best Seller List and she's been on a roll ever since. She attributes the initial success of EVERMORE, in part, to the fact that Walmart put in a huge order. They loved the book and loved the cover. She pointed out that a lot of towns don't have bookstores and Walmart is where a lot of people find books. Of course it also helped that EVERMORE was a really good story.

When rewriting her first novel, Alyson said her agent recommended she read STORY by Robert McKee. She knew within just a few pages what was wrong with her book and how to fix it. She still looks back through STORY before starting a new manuscript. The other book she recommended was SAVE THE CAT by Blake Snyder. Snyder, like McKee, bases his story analysis on screenplay format. He breaks stories into fifteen "beats" that keep the action moving forward. Alyson said one of the first things she does when she sits down to write is to make sure that her story has all fifteen of the "beats."

Regarding having other people critique one's writing, Alyson said she is a very private writer and does not like to share her work with anyone until it's in pretty good shape. She said "Advice comes in all forms and not all of it is good." She warned against getting too many people's opinions in your head and losing track of who you are writing for. If you are going to work with someone, make sure they understand and appreciate your genre. You don't want someone who focuses on literary fiction to critique your romance novel or vice versa.

It was very special to have Alyson Noel in New Mexico for her first stop on the FATED tour. Fans will have a special treat in store with this exciting new series.