The Secret Language of Stories

The Secret Language of Stories (SLOS) is a twelve-step story analysis I created that is based upon The Writers Journey by Christopher Vogler (See link below). I use this method to create my novels and to teach writing to kids of all ages as well as adults. SLOS is broken down into twelve basic elements or Story Frames. Stories don’t necessarily contain all of the components, and they don’t always occur in the order given here. In longer stories, many of the elements are repeated. Subplots may have their own story threads and novels may include endless repetitions of the Plan, Attempt, Response sequence found in the middle section of the story. The purpose of this analysis is not to micro analyze every element of a story, but rather to help students and other writers to recognize what is going on in stories and to begin to think like authors.
Beginning:
The beginning of the story is the setup for what is to come. It may be very short or quite lengthy. Back-story and history leading up to how the hero came to be in this place in the Ordinary World might be given before the story really gets started or it may be woven throughout the story. This is the section where questions are raised. Will the character succeed? What will he find out? It includes the following:

1)      Ordinary World – Setting and characters are introduced.
2)      Call and Response – This may occur during or after the inciting incident. The Hero receives a call to adventure. Sometimes he eagerly undertakes this challenge, but more often there is a period of reluctance or even refusal as the dangers of the adventure are weighed against possible benefits.
3)      Mentors, Guides, and Gifts – A mentor appears to encourage the hero to accept the challenge of the call and gifts are often given to help him on his way.
4)      Crossing – The hero decides to act and crosses over into the New World.

Middle:
The middle section of the story has also been called the Initiation phase (See Joseph Campbell and The Hero with a Thousand Faces) because the hero is learning how to live in the New World and proving himself as he faces a series of increasing challenges. Some questions will start to be answered, but even more perplexing questions may be raised. The middle section is much longer than either the beginning or the end. What makes it longer is a repetition of the Plan, Attempt, Response sequence which can go on indefinitely for hundreds of pages. The middle section includes the following:

5)      New World – The hero faces small challenges as she learns the rules of the New World.
6)      Problems, Prizes, and Plans – A clear story goal is established and the hero makes plans for how it will be attained. Sometimes the story starts with a problem to be solved and sometimes it starts with a prize to be attained but ultimately both goals and obstacles will be woven into the story.
7)      Midpoint Challenge: Going for the Prize – An attempt is made to attain the Prize. A shift in the story occurs.
8)      Downtime – This section shows the hero’s response to what happened during the attempt. It may be a time of celebration, recovery, healing, regrouping or sulking, depending on what happened during the attempt to attain the Prize.

End:
It may seem as if the story is over at this point. In some picture books, fables, and short stories, this may be true, but for most stories, it is only the beginning of the end. The hero may even be back with his friends, thinking he is safe and enjoying his prize, but the ultimate challenge is about to happen. In this section everything is wrapped up and all (or most) of the questions will be answered. Sometimes a book will end on a cliffhanger where a brand new question is raised, suggesting that there might be a sequel. The final section includes the following:

9)      Chase and Escape – A twist sends the hero off in a new direction. Something is being pursued. The hero may be pursuing the prize or the villain, or the villain may be pursuing the hero.
10)   Death and Transformation – This is the point in the story where it appears that the hero will lose whatever is of highest value. Often someone dies at this point in the narrative.
11)   Climactic Showdown – The hero must face one final challenge to demonstrate whether the changes that have occurred are lasting or only temporary; internal or merely external.
12)   Reward -  The hero gets what she has earned. If she has passed the final test, it may be a reward. If not, there may be other consequences. Often there is a celebration and the return of the hero to the group.

The above description is a very brief overview of the story analysis process. If you have questions or if you are interested in writing workshops for your staff or students, please feel free to contact me at My Email.

For some examples of how this analysis may be applied to books and movies visit the following:

Go to my Teachers Pay Teachers store at Carolee Dean at Word Travel Press LLC to find a FREE resource for the picture book Gingerbread for Liberty!: How a German Baker Helped Win the American Revolution by Mara Rockliff. Other resources include a book companion for Emmanuel's Dream: The True Story of Emmanuel Osofu Yeboah by Laurie Ann and Sean Qualls


There are many excellent books that have influenced my plotting techniques. For further reading I recommend:
1. The Writers Journey: Mythic Structure for Writers by Christopher Vogler
2. Save the Cat: The Last Book on Screenwriting You'll Ever Need by Blake Snyder
3. Story: Substance, Structure, Style and the Principles of Screenwriting by Robert McKee
4. First Draft in 30 Days: A Novel Writer's System for Building A Complete and Cohesive Manuscript by         Karen S. Wiesner 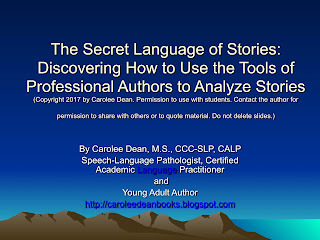 GO HERE FOR THE POWER POINT ON YOU TUBE. YOU MAY USE THE SLOS POWER POINT WITH YOUR STUDENTS TO TALK ABOUT EACH OF THE TWELVE ELEMENTS OF SLOS. SLIDES WILL ADVANCE ON THEIR OWN EVERY 3 SECONDS. USE THE PLAY/PAUSE FEATURE TO CONTROL THE SLIDES.