UnDiagnosed: The Ugly Side of Dyslexia 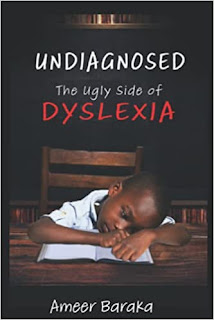 In Undiagnosed: The Ugly Side of Dyslexia, Ameer Baraka shares his personal struggles with growing up on the mean streets of New Orleans, unable to read, and in continual trouble with the law. He was incarcerated at the age of 14 for manslaughter and served time again in his twenties. He was finally diagnosed with dyslexia while in prison.

After learning to read, Ameer turned his life around and became an Emmy-nominated actor. He is also a dyslexia advocate, youth mentor, and prison coach. He works with youth that are behind bars. He is keenly aware of the school-to-prison path for kids who can't read, and he makes it his mission to raise awareness about dyslexia by speaking at universities, businesses, and youth organizations around the world.

As I mentioned in last week's post about Jubilee: The First Therapy Horse and an Olympic Dream, my mission for 2023 is to share stories of resilience. There are many stories out in the world today about people who have overcome dyslexia to become successful entrepreneurs, millionaires, and billionaires. But there is also an ugly side to dyslexia. It's the story Ameer shares of young kids who get stuck in a school-to-prison pipeline because they cannot read.  Many of these young people belong to minorities. They don't have wealthy parents who can pay for expensive tutors or private schools for kids with learning differences. They don't have parents with the tenacity to go up against powerful school systems to demand accommodations for their struggling learners. They are not raised in families with the understanding and the means to support alternative dreams if pursuing higher education is not in their child's future.

And yet, Undiagnosed is still ultimately a story of hope and resilience. Ameer takes us through his journey through a very dark place to come out the other side where he offers hope to kids who were just like him and understanding to educators as well as legal authorities. He now speaks to police departments and provides training on racial bias. He used to be part of the problem and has now become a shining example of the solution.

Ameer will be speaking on Monday, January 9, 2023, at a free online event hosted by the Dallas Chapter of the International Dyslexia Association. Hear his story live at his book launch. See the QR code in the announcement at the bottom of this post for details.

When I was working in the public schools, a large percentage of my struggling students had parents who were or had been incarcerated. It is what inspired me to write Take Me There, about a teen boy who has a big heart but always finds himself on the wrong side of the law. The story is fictional, but it was inspired by a theme I saw over and over again. Parents can't read, have limited life choices, and end up in prison. Their kids can't read and often end up on a similar path, not knowing why. The young man in my story goes looking for his father who is in prison in Texas to find out if badness is in his blood or if it is something he can outrun. What he learns is that his father's illiteracy led him to a life of crime. He was a football star in a small Texas high school who got passed along in school by teachers who meant well but never really helped him learn. 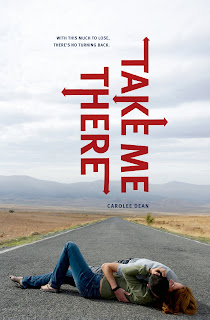 There are many places in our country where there is a simple formula for estimating the size of a new prison. They look at the illiteracy rates of the surrounding area. That is the real crime, that we have learned the formula for a life of incarceration, that it is within our power as a society to remedy much of it, but that we don't. Listen to Ameer's story to get inspired about what can be done. See details below. 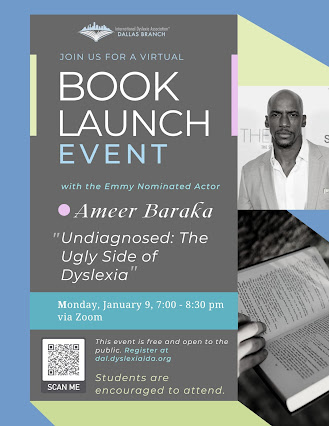 Email ThisBlogThis!Share to TwitterShare to FacebookShare to Pinterest
Labels: Ammer Baraka, Undiagnosed The Ugly Side of Dyslexia