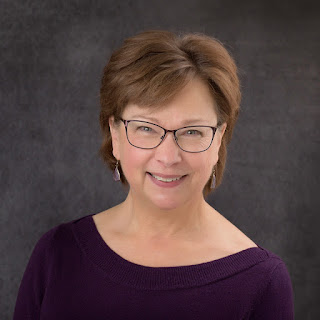 I’m excited to be interviewing author, Beth Anderson, for a Q&A about her new book, Tad Lincoln’s Restless Wriggle: Pandemonium and Patience in the President’s House. The book is illustrated by S.D. Schindler and due to be released on October 5, 2021, but I was very lucky to get a sneak preview. Speech-language pathologists and classroom teachers are going to love this unique look into Abraham Lincoln’s special relationship with his most unique son, especially as we approach Dyslexia Awareness Month coming up in October.

Carolee: As a speech-language pathologist, what excites me the most about your new book is that you feature a main character with a speech difference which your sources indicate may have been a partial cleft palate. Could you give us more details about what evidence points to that conclusion?

Beth: Thank you for inviting me to share some of the research, Carolee. It was fascinating to see what experts learned from the historical record. But, before I share their work, it’s important to know that they used limited details reported by non-professionals at a time when there was no generally accepted terminology for speech disorders. I found one in-depth analysis and a few other articles that explore possibilities while noting the limits of available information and the complicated nature of diagnosis.

A reference to an orthodontic device of the time signals a dental abnormality. Also, Tad’s need for specially prepared food indicates problems chewing/swallowing. Some of Tad’s speech patterns are associated with cleft palate, as well as some of his reported social emotional and learning challenges that young people with cleft palate sometimes face. 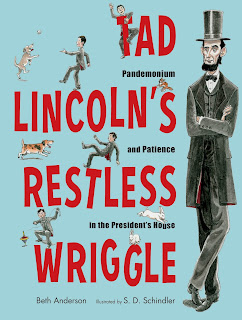 Carolee: Because I work with so many students with dyslexia, I’m also interested in learning more about Tad’s language-based learning disability. Were there interesting details about his learning style and/or differences you would like to share that didn’t make it into the book?

Beth: This area lacks specifics. The most detailed research addresses his speech rather than learning disabilities. The evidence for LD tends to be that of association with other issues of his. There’s a strong indication of language delay and possibly dyslexia. Tad was called a slow learner, impulsive, and hyperactive. And he was also described as quick-minded and wise beyond his years. I’ll share some of his documented language issues here.

There are multiple examples from first-hand accounts of Tad’s pronunciation issues. Many are consistent with immature speech patterns. Tad called Elizabeth Keckley “Yib” (probably for “Lib”), Crook was “Took”, Papa dear was “Papa-day,” and Mrs. Sprigg was “Mith Spwigg.” There seems to be a consensus that Tad had an articulation disorder, perhaps a severe one.

As far as his "gushing" speech, it’s possible he had a cluttering disorder as he also exhibited a few of the issues that go with it like distractibility, hyperactivity, certain social/vocational problems (such as delayed ability to dress himself), and language difficulties. Experts are cautious due to the difficulty in diagnosing cluttering.

Tad’s behavior also had signs of ADHD. Though this is supported by association with some of his other difficulties, a diagnosis would require more information.

He insisted (at age 12) that a-p-e spelled monkey when presented a picture and the word. It appears to be more than a substitution as the anecdote notes the interaction had an intentional focus on the letters. Some see that as evidence of dyslexia. 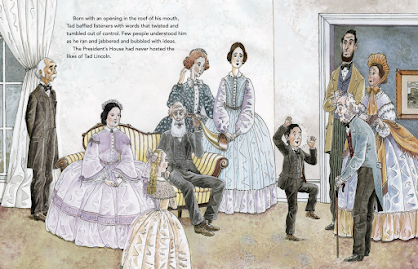 As a former educator, when a child runs away from his tutor and does anything he can to avoid lessons, I tend to think he’s frustrated by his failure and learning differences—even more disheartening when your older brother is a whiz kid. And when you consider all the stress he was dealing with from his personal challenges, as well as living life in the White House (age 8 to just after his 12th birthday), it adds another layer. When Willie died in 1862, Tad lost a brother, playmate, and the person who “translated” his speech for others. In school, he was mocked for his garbled speech and called a stutterer. There’s no real evidence he was actually stuttering, and it’s likely that people used the term for a speech impediment. Many reported a lisp and said his speech was unintelligible due to both his pronunciation and his words flooding out and being jumbled. So you can imagine how people reacted to him, rejected him, and discredited him. Learning about what Tad struggled with and all he faced helped me try to understand the world from his point of view.

Carolee: As an adolescent, Tad did learn to read and write and to speak clearly. Is there any more information available about how he overcame his challenges?

Beth: Tad was a joyful rambunctious child. I would bet he got away with a lot and pushed his limits because he was the son of the President. The President’s House, as the White House was called at the time, was an exciting place. An attic full of treasures. A bell system to call servants. A rooftop perfect for play cannons. A stable with all sorts of animals. A soldiers’ camp on the property. All pretty irresistible for a child! I think there are a number of factors contributing to Tad’s rejection of schooling, and there are a few hints that one of those was that he wasn’t giving lessons his all. After the loss of his father, he realized that he would have to take life more seriously, be more responsible, and grow up.

There is little information about how he overcame his challenges. At age 14, in Chicago, his brother Robert hired an “elocution” tutor. At 15, Mary took him to Germany where he boarded at Dr. Johann Heinrich Hohagen’s Institute and received special instruction. Tad didn’t learn to read, write, and speak clearly until he was sixteen. I didn’t find any information about his instruction.

Carolee: You portray a very unique relationship between Abraham Lincoln and his son, Tad. The president was quite understanding and accepting of his son’s differences at a time when most adults had little patience with children. When you consider that the story is set during the Civil War, Lincoln’s relationship with Tad is even more impressive. How do you think this relationship affected Tad’s development as a person? As a parent and an educator, do you have any personal suggestions for building self-esteem in students with learning challenges?

Beth: Abraham and Mary Lincoln were considered permissive parents and criticized for their lack of discipline. The quote that opens the back matter gives us a window into Abraham’s thinking:

“Love is the chain whereby to bind a child to its parents.”

Other quotes from Lincoln showed he understood the challenges Tad faced, the pressure of life in the public eye, and a child’s need to play. There was plenty of time for Tad to learn his letters. After Willie died, Tad and his father had a special bond that sustained both of them. Lincoln said, “I laugh because I must not weep.”

The more I learn about Abraham Lincoln, the more I see his extraordinary ability to see goodness in people, whether the “enemy” or an unruly child. And I think that’s the secret—being able to see past the inappropriate behaviors to find the goodness. Not always easy, right? When I look at father guiding son, I see the familiar “I do, we do, you do” pattern. I saw the father’s behaviors come through in the son. If you look at Tad’s actions, especially the turkey pardon, he’s seeing goodness, too, and speaking for those who can’t. Papa modeled, then guided, then gave Tad opportunities to be successful and use his energy in deeds that allowed others to recognize his goodness. Patience is hard, but I have to imagine that the child is feeling frustration too, and trying to be patient with the rest of the world. I think it’s about mutual trust and respect, and offering a scaffolded path that provides comfort and encouragement for each child to see their own goodness.

Thanks so much for your questions and the opportunity to share the fascinating research!

Carolee: Thank you, Beth, for taking time out of your busy writing schedule to talk about your book.

Earlier this summer, Beth joined me and two other Colorado authors for a discussion with Second Star Books about writing memoirs and personal stories. Watch the video and read the Q&A HERE. Pre-order your copy of Tad Lincoln’s Restless Wriggle today from a local bookstore or from AMAZON.

Beth has another book that is featured in my recent educational resource Story Frames for Teaching Literacy: Enhancing Student Learning through the Power of Storytelling. That title is An Inconvenient Alphabet: Benjamin Franklin and Noah Webster’s Spelling Revolution. Beth is a former ESL teacher and conducts intensive research for her books about the lives of popular historical figures. I always learn something new from reading her work. Narrative non-fiction picture books make great therapy tools for SLPs working in the area of narrative intervention which is the subject of Story Frames. 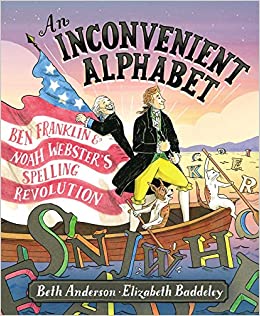