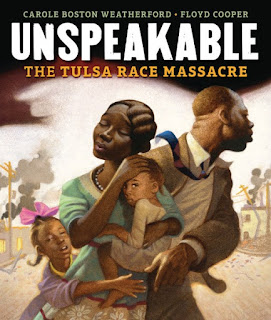 This title was just released this February and I've already added it to my library. Unspeakable tells the true story of the Tulsa Race Massacre of 1921. It's a picture book that tackles a tough subject beautifully and sensitively.

The Greenwood District, known as the "Black Wall Street" was a prosperous area of Tulsa, Oklahoma with thriving businesses, salons, and theaters. The oil industry was booming and many people, black and white, moved to Tulsa looking for a brighter future.

A white female elevator operator accused a 19-year-old black teen, Dick Rowland, of assaulting her. He had stepped on her foot. He was arrested and an angry mob of two thousand went to the jail, intent on lynching him, but 30 armed black men stood guard. That confrontation left 12 dead. The mob then turned on the town, looting, burning homes and buildings to the ground, and killing two to three-hundred residents. Another 8,000 lost their homes. Officials did nothing to stop the violence and the incident was not even investigated for 75 years. The next day the young black man, Dick Rowland, was released from jail and all the charges were dropped.

The book is recommended for grades 3-6 (ages 8-12), but with a reading Lexile of 1100L, it is also appropriate for older middle school and even high school students. Read more about the book on the Lerner Blog.

The illustrator, Coretta Scott King winner, Floyd Cooper, has a special connection to the story. He grew up in Tulsa. His grandfather was in the Greenwood District during the massacre and witnessed the events firsthand. It was initially called the Tulsa Race Riot which meant that insurance companies were not required to pay any damages to those who lost homes, businesses, and family members.

It should result in a very lively discussion! 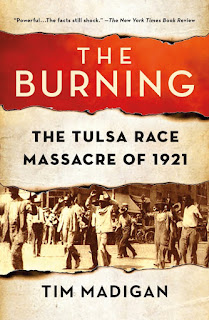