Recycled Storylines or Mythic Mash Ups: A Look at A STAR IS BORN and PHANTOM OF THE OPERA 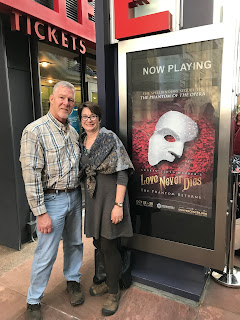 We went to see Love Never Dies, the sequel to Phantom of the Opera, at the Buell Theater in downtown Denver and I was surprised by how captivating it was. I'm usually not a fan of sequels and remakes. It's difficult to surpass or even come close to equaling the power of the original version of a story and although I do appreciate recycling, it feels lazy when it comes to storytelling.

A couple of weeks ago we saw the latest remake of A Star is Born with Bradley Cooper and Lady Gaga and I was surprised to learn that it is the fourth version of the story. I remember well the Kris Kristofferson and Barbra Streisand adaptation but was surprised to find there was a 1954 Judy Garland rendition and that the original was filmed back in 1937.

It got me thinking about what these two stories have in common. There is the age old trope of the mentor creating a work of art and falling in love with it. My Fair Lady is another example of this. It was based on a 1917 play by George Bernard Shaw called Pygmalion which became a movie of the same name in 1938. Pygmalion was inspired by a story of the same title from Ovid's Metamorphoses about a sculptor who fell in love with one of his statues. Ovid was a Roman writer who died in AD 17 so it's a pretty old story.

There there is the even older Greek myth of Eros, the god of love, and Psyche. The Oracle of Delphi predicts that Psyche will marry a terrible serpent. She is whisked away and taken to the castle of Eros (aka Cupid in the Latin version, son of Aphrodite) where she is quite happy, though disturbed by the fact that her husband will not show his face to her. He warns her that she can never look upon him. Her sisters come to the castle for a visit and tell her that her husband must be the terrible serpent foreseen by the oracle. Psyche lights a candle to look upon Eros' face and is amazed by his beauty, but when he awakes and realizes her betrayal, he flees. Psyche must undergo three difficult trials including a nasty trip down to Hades, to prove her love and regain the trust of Eros.

In later versions of the story the man appears to be a beast (as in Beauty and the Beast and Phantom of the Opera) and his true inner beauty must be revealed. Though in the case of the Phantom he also has a murderous dark side as well. In other stories the man appears to be beautiful (as in a Star is Born) but then his darker side is revealed.

The truth is that almost all stories are recycled to some degree. Some writers believe there are only three basic plot lines. Others argue for six and still others for more but most agree there is a finite number. I believe that the reason the above stories are successful is because they resonate with stories we know and love. Check out my tab for The Secret Language of Stories to see how I address story plotting when I write my books and teach story structure to my students.

Check out this article  on How Many Basic Plots Are There?

When we left the theater we were greeted by the street performers below. The whole day was magical! 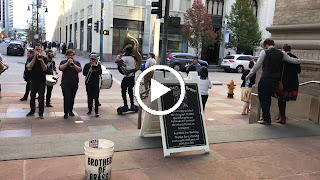